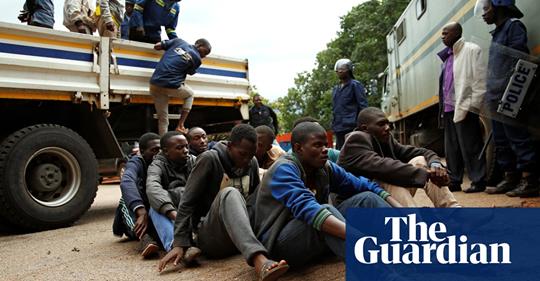 PLEASE BE PRAYING FOR ZIMBABWE…….
While the world press shows images of what is happening in Zimbabwe, the following excerpts, taken from recent emails from our partners in Zimbabwe, bring a chilling reality to the current situation.

.……Ralf, since November I am worried stiff about the Bond Notes balances, All our loan moneys is in local currency, we can only convert to USD when we buy the real USD on the unofficial market at 1:3.3 rate. I am so worried at the trend now since it is what led to the downfall of microfinance institutions in Zimbabwe in the 2008 era. for Zimbabwe even 20% once off is not enough to cover the management fee and to cushion us on the inflationary environment and that other commercial scheme of 10% per month does that but of course its way too expensive for the rest of the beneficiaries , the poor beneficiaries.

I am hoping that the economy will hold, the current leadership is also failing and perfoming worse than the previous one…and the free market has proven that the fallacy that the bond note is at par with the USD is not tenable , I am worried stiff about the implications…….

……Thank you for your prayers. We are saddened at what is happening, it is so sad. The price hikes are obviously not meant to develop the country…and there is no justification whatsoever to raise price of anything by 150% especially fuel…it was $1.34 per litre and is now $3.31!!
The previous regime was also corrupt and repressive , but what we are encountering now is of epic and medieval proportions, the armed militia is heartless and killed people, the soldiers are always sent to do the bidding of the big shots.
Whole of last week was a stay-away, turned violent in 4 major cities but this week is calm, the military was hounding and beating and shooting people, some of them are on video, but the funny thing is when , two days ago, the army gave a press conference and lied that they didn’t do it and said it was some rogue elements who came and stole their uniforms and guns last week! And yet they were armed soldiers with helicopters , army trucks etc hounding and shooting people, it is so sad. This week is a rumor of another stay-away starting tomorrow. All our problems are political but they affect us economically as well, corruption taking centre stage as well, we pray that we shall emerge stronger though…….

…….Thank you. I saw your msg soon after you sent it, my heart is heavy as well , the current scenario is disheartening to me. Zimbabwe is a beautiful country and I love my fellow countrymen, the undoing of it all is our leaders, and we are so peaceful that we will not really challenge them much, the few uncoordinated times we tried have seen bloodshed by the repressive military, and political power is so intoxicating that they are ready to go for broke to retain power, and forget about living a corrupt-free and godly life, they don’t care about us as long as they are amassing wealth, and they are so rich that you will be surprised at the stark contrast with the poor, I once told you before that it’s a heart like yours that we do not have, but you are not have a sense blessed financially as the majority politicians in Africa, they just don’t want to share even 5% with the poor….the world needs more people with the heart to serve. They own mining companies that are performing well, but all that is stashed in accounts overseas and buying lots and lots of properties…

…….Thanks for your prayers Ralf. We pray that it shall be well, most of us have sought of resigned and left all to God, of course He never fails. Our economy is getting worse, my full tank in the little car is 36litres and last week I paid $116,50…for fuel I used to pay $47 for the same liters of petrol, they don’t care, prices are rising daily, it’s pathetic now. The economy is really crying out against the regime but I know them, they did it in 2008 and the country stalled, they DONT care……..

……Harare Zimbabwe isn’t stable since yesterday as a result of demonstrations against the gvt fuel increases have turned violent with no transport both local and long distance therefore l am stuck in Harare. Yesterday l walked over 40km from Harare cbd to my residence. Please pray for Zimbabwe……..